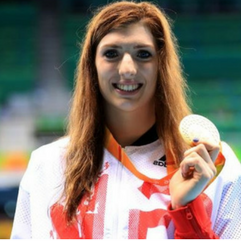 Bethany Charlotte Firth, MBE (born 14 February 1996) is a Northern Irish swimmer competing for Great Britain and Northern Ireland as of 2014; previously Firth had competed for Ireland. A four time Paralympic gold medalist, she has won gold in her specialist event, the 100 metres backstroke for both Ireland at the 2012 Summer Paralympics and Great Britain at the 2016 Summer Paralympics, in addition to the 200 metres medley and 200 metres freestyle for Great Britain at the 2016 Games, where she was the nations most successful Paralympian with three golds and a silver medal. She competes in the S14 classification for athletes with an intellectual impairment.