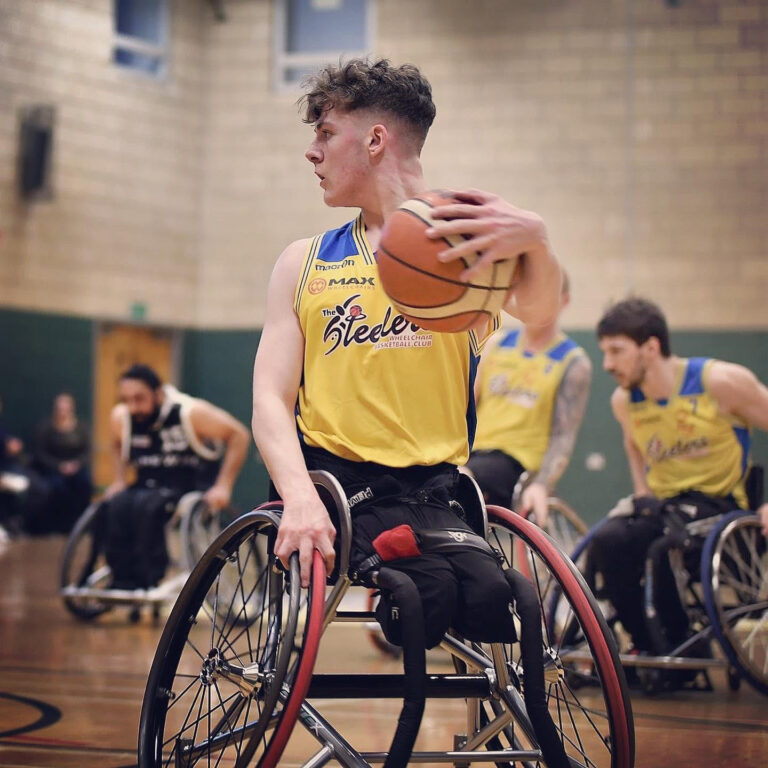 Accountancy student at University of Sheffield, currently on a placement year at Grant Thornton

Qualifying for the 2022 Commonwealth Games

Conn’s counting the days to his first Commonwealth Games

Third year accountancy student Conn Nagle is brimming over with enthusiasm and excitement as he looks forward to his first ever Commonwealth Games. Currently on a year out from The University of Sheffield and working with Grant Thornton, the Premier Division player will be part of a four-man NI wheelchair basketball team at the upcoming Birmingham games.

“It’s a three-on-three team tournament so one player will start as a substitute for each match. We’ve been drawn in a very strong group playing against Australia and Canada. But I can’t wait – it will be an amazing experience all round. Qualifying for the Commonwealth Games with this team is certainly my proudest moment to date.

“I’ve competed in multi-sport events before including the UK School Games, but the Commonwealth Games will be massive. I’ll be interested to see how many spectators come to watch us and am really looking forward to the atmosphere.”

Conn first came across wheelchair basketball at his Park Lodge primary school in North Belfast when Disability Sport NI visited several times and set up matches so that his mates could experience a wheelchair sport and play alongside Conn. “I loved feeling part of a team and everyone being on equal terms.”

However, it was at Musgrave Hospital during an appointment to get prosthetics fitted that his mum and dad spotted a Knights Wheelchair Basketball leaflet and suggested Conn gave it a try.

“I didn’t enjoy it at first as I was small, and it was a long way to aim at the net. But mum kept promising me ice cream if I stuck at it and when I reached eight or nine years old, I started to fall in love with the sport. I still struggled with the key skills needed but at about 12 or 13 everything started to slot into place, and I made good progress eventually becoming captain of the Northern Ireland U15s. I was pushing forward with the GB Under 23 set-up but of course I continued to play for the Knights in Belfast.”

Conn attended his first GB camp aged 13 – although it was actually an Under-23 camp, so he was by far one of the youngest and smallest. It led to the 2014 Europeans and whilst he wasn’t selected, Conn was invited to further GB camps and became part of the GB development squad in 2016 that competed against the Ireland senior men’s team in a 3-day friendly tournament. “We actually played against Ireland four times and beat them each time.”

“With Phil I did a lot more technical and individual sessions really focussing on key improvements. I was part of the U22 GB squad and played in the 2018 European Championships just before starting Upper 6th at Aquinas Grammar. A shout out to the school as they were brilliant in supporting me on my basketball journey.”

At that time (2018/19 season) Conn had a really good year playing for the Knights in the British Wheelchair Basketball league. They won their section of the league and gained promotion to the Premier Division.

The following season Conn joined the Sheffield Steelers when commencing his course at the University of Sheffield and had a really strong first year up until the league was abandoned in March 2020 due to COVID-19. Season 2020/21 didn’t go ahead but Conn was invited by GB Men’s coach Haj Bhania to train at Sheffield’s English Institute of Sport. Conn spent a valuable six-month period working on technical, conditioning and shooting sessions coached by Haj.

“These were amazing sessions playing alongside many superb players – it was a real privilege to be involved.”

Last August (2021) Conn started what is still a very busy and intensive year with accountancy and consultancy firm Grant Thornton. “It’s a real balancing act managing work, playing for the Sheffield Steelers and preparing for the Commonwealth Games. Grant Thornton have given me great support especially in this build up to the Games period.

“At Sheffield Steelers we had a decent season this year but were disappointed at coming second in the Premier Division of the league. But I really feel I’ve improved during this time which bodes well for Birmingham.

“The NI team has been planning for these Games for around two years and ramped up our preparation from last September onwards. Every month or so we come together for weekend camps and have built up a great rapport amongst the team.”

Conn will be playing alongside James MacSorley, Matt Rollston and Nathan McCabe – athletes whom he’s known well for many years. “It’s a close-knit team and our camaraderie will hopefully stand us in good stead against other teams.

Conn is one of five athletes who have each benefitted from a special £1000 bursary provided jointly by enthusiastic Mary Peters Trust supporters David and Joan Magill alongside their children and grandchildren. David, who passed away in November 2021 aged 86, was a generous, hardworking, and fearless person in the worlds of business, community, volunteering, family and sport. These athlete ambassador awards are to mark David’s contribution to local sport and are helping five young athletes to improve, develop and reach their full potential. The family plan to continue supporting the Trust.

“Funding support from the Mary Peters Trust has been vital. Playing across the water is essential to improvement and Trust funding helped with travel as well as equipment costs. I simply wouldn’t be where I am without the Trust.”

Conn also pays tribute to his mum and dad and especially all those ice creams bought by his mum to encourage him to stay the course! “Dad gave up so many weekends to travel to England with me for junior competitions and Mum drove me to Knights training twice weekly for years. I’ve an older sister and brother and two younger brothers and the whole family are coming to support me and cheer me on in Birmingham. Bring it on – I just can’t wait.”