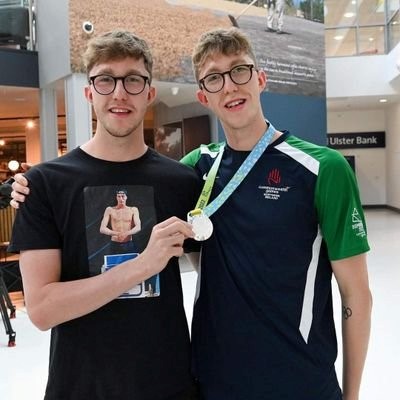 Both are in second year at famed sporting school of excellence, Loughborough University.

Nathan points to being a multiple Irish gold medallist and international meet finalist in Edinburgh as his top achievements to date. Daniel says it’s his Commonwealth silver and a World Championship finalist place in Budapest 2022 that are his proudest moments.

Next target for both is the Paris 2024 Olympics

Identical twins Nathan and Daniel Wiffen certainly have each other’s backs when it comes to looking after each other, but whilst back stroke is Nathan’s preference, Daniel excels in freestyle. It was the 1500m freestyle event where he secured a silver medal in the Birmingham hosted 2022 Commonwealth Games.

The 21-year-old star swimmers are past pupils of Armagh’s St Pat’s Grammar and live in Magheralin. Both are in second year at famed sporting school of excellence, Loughborough University. Naturally they are there due to the top quality coaching and sports facilities, but also because their courses are considered amongst the best in the UK and Ireland. In similar fashion to their swimming, Daniel and Nathan’s course content overlaps with Daniel pursuing a degree in IT with Business Management and Nathan studying Computing with Management.

Nathan points to being a multiple Irish gold medallist and international meet finalist in Edinburgh as his top achievements to date. Daniel says it’s his Commonwealth silver and a World Championship finalist place in Budapest 2022 that are his proudest moments. Also held in high esteem for Daniel is being a multiple Irish Record holder and a Tokyo Olympian.

Next target for both is the Paris 2024 Olympics. Nathan hopes to qualify for his first Olympic Games and Daniel is aiming for a medal in Paris and before that a podium finish at the 2023 World Championships in Japan.

“The crowds at Birmingham really spurred me on,” says Daniel. “At Tokyo it was challenging competing in an empty stadium with no friends and family there to cheer me on. At the Commonwealths it was just brilliant. My mum and dad, brother Ben and sister Beth and of course Nathan were my best supporters as well as our friends from Loughborough. I could actually hear my siblings and parents’ voices above everybody else’s. It made me swim even faster.”

It all started for the twins when they were three months old. According to their parents both boys loved the water from their very first splash at a Water Babies sessions. Their older brother Ben (now 27) had joined Lurgan Swimming Club and the twins followed suit aged six. 2012 was a big turning point for both. They joined Lisburn Swimming Club and started on their respective competitive journey with Nathan clocking up his first Irish medal in the 2012 Summer Nationals – Division 2. In 2015 Daniel was selected for the Irish National Team and took part in various Swim Ireland camps and competitions.

Nathan explains, “We started in the bottom squad at Lisburn and progressed upwards. Moving to Loughborough has been another game changer. Whilst we support and encourage each other, and each gives the other an honest appraisal we don’t train together and are looked after by different coaches.”

Nathan is coached at Loughborough by multiple medallist Andy Wallace who has also coached British swimmers Max Lichfield and Luke Greenbank. Daniel is looked after by Loughborough’s Performance Director, Andi Manley. Daniel and Nathan are often in the pool at Loughborough University alongside swimming tour de force Adam Peaty and the pair say that Adam always nods and speaks, respecting them as fellow athletes and campus swimmers.

Each week the twins spend a combined 50 hours plus in the pool and gym and believe that skills gained now, such as time management and discipline, will last them a lifetime. Swimming has also taken the duo to many countries worldwide including Japan, Turkey, France, Russia and Hungary enabling them to gain positive lifetime experiences.

Both also pay tribute to parents, coaches, the Mary Peters Trust as well as big brother Ben who all have helped them to reach this point in sport.  “Our brother Ben is 6 years older than us and was an early inspiration for us. Ben was an Irish medallist in the 1500m and is now a swimming coach based in Enniskillen and has done a lot for us behind the scenes,” explains Nathan.

Daniel adds, “We simply would not have achieved anything without mum and dad driving us both to training at 5am in the mornings and we’d both like to thank them for all the time and money they’ve invested in us. They are the reason we are both swimming at a top level.”

In terms of the Mary Peters Trust both agree support from the Trust has been vital. Nathan received a funding award in December 2021 and says, “It helped me prepare for swimming internationally and paid for away trips.”

Daniel has benefited from Trust awards in the past and this year is one of five local sports people to each win a David Magill bursary provided annually by the Magill family and in memory of David who passed away in November 2021. “Funding from the Mary Peters Trust allowed me to do all the prep work I needed to achieve, and ultimately helped me win my Commonwealth Games silver medal in Birmingham this summer.”

The twins also are very thankful to their sponsors who support in kind including Australian brand Funky Trunks, Craigavon based McKeever Sports and innovative US swim brand, Finis.

In terms of influential sporting icons Daniel cites his training partner Felix Auboeck. The Austrian is the current world champion in 400m freestyle. “I love the way he carries himself in and out of the pool. Felix is not at all cocky despite his achievements and is really down to earth.”

For Nathan it’s Australian swimmer Kyle Chalmers, “Kyle is a very caring person and has come good through so many injuries. He really inspires me to give of my best.”

One thing that may surprise people about the twins is that both have had quite a lot of acting experience. They’ve secured roles as extras in a number of dramas including the high-profile Game of Thrones series. No doubting that they put as much effort into acting as their swimming.

Daniel’s words of inspiration: “Always give 100% of everything you do. And don’t be upset with the results you didn’t get from the work that you didn’t do.”

Nathan’s words of inspiration: “ave a plan – if you don’t know where you are going, you’ll probably not wind up there.”