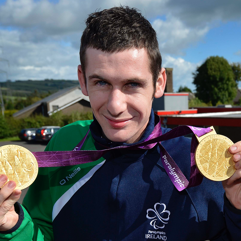 Michael realised his natural flair for athletics at the age of 12 and began running for his school and local club, St. Malachy’s AC. He then came storming into the Paralympic world stage in 2005 at the age of 15 and went on to win two European medals in the T37 800m and 1500m.
Coached by his father, Paddy, who was awarded Northern Ireland’s Sports Coach of the Year in 2008, Michael has a personal best in his preferred 800m of 1:57:22. The Belfast Telegraph once referred to Michael as – ‘a modest, articulate young runner with the world at his feet.’
Michael said: “Going into 2016, it is going to be an exciting time and I want to show I am still on top.”